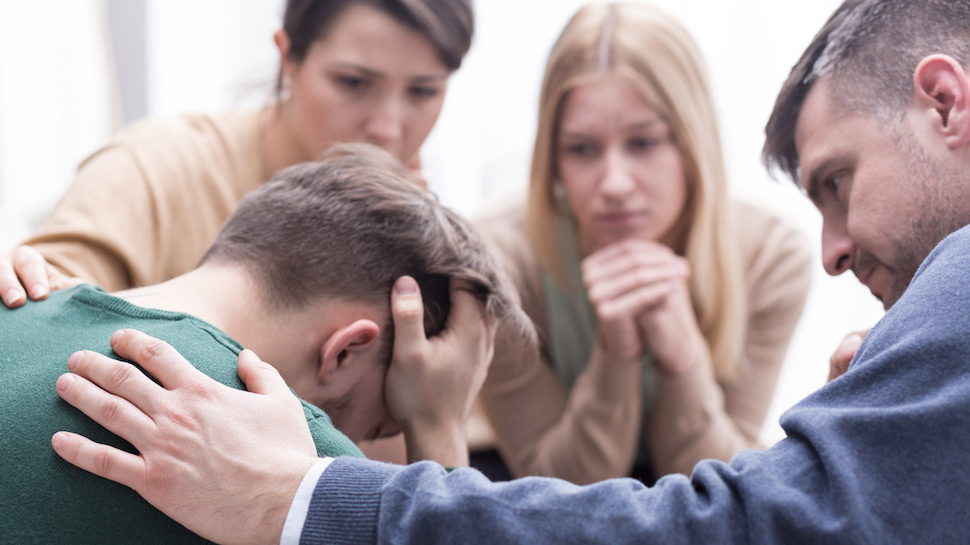 Schizoaffective disorder is a mental health condition that is chronic, meaning it can be treated and controlled, but not cured. Someone living with this condition experiences many of the symptoms of schizophrenia but also has symptoms of a mood disorder. It is estimated that about one out of 200 people in the U.S. will be diagnosed with schizoaffective disorder. This condition is very serious, can cause major disruptions to daily life, and must be treated to manage symptoms.

Schizoaffective disorder is characterized by symptoms of schizophrenia that occur along with symptoms of mood disorders, including mania and depression. Schizophrenia causes psychosis, meaning there is a break from reality, and may include delusions, hallucinations, incoherent speech, and disorganized behavior.

The mood symptoms may be manic, depressive, or both. Mania is characterized by euphoric emotions, high energy, irritability, racing thoughts, and exaggerated self-confidence, while depression causes hopeless, sad feelings, as well as lack of energy and loss of pleasure in normal activities.

Schizoaffective disorder can cause unique symptoms or have varying characteristics depending on the individual. For this reason, the condition is not as well understood as other psychiatric disorders. Prior to the most recent addition of the DSM-V, the manual used by psychiatrists to diagnose patients, schizoaffective disorder was not clearly defined. In the fifth edition, there are clear diagnostic criteria, but even so, the experience of the condition can vary a lot from one person to the next.

>> Learn more about our Treatment for Schizoaffective Disorder

Like many mental health conditions, exact causes for schizoaffective disorder cannot be pinpointed. There are many factors that come into play, including genetics and family history. A person is more likely to have this condition if a family member has also been diagnosed with it. Underlying the genetic component may be brain chemistry and structural abnormalities that play a role in the development of the condition.

There are also known to be triggers, events that can begin the onset of the development of schizoaffective disorder. Whether or not these can be considered causes is uncertain, but they do tend to trigger the symptoms in someone who may already have been prone to the disorder. These include extreme stress or traumatic incidents as well as the use of psychoactive drugs.

Signs and Symptoms of Schizoaffective Disorder

When to See a Doctor

A person should see a doctor if any of these symptoms manifest and persist. Persistent depressive feelings and psychotic symptoms should be taken very seriously. Other signs that a doctor visit is needed include loss of interest in activities, being unable to manage normal daily tasks, deteriorating relationships, and any unusual, changing thoughts or behaviors. It isn’t always easy to recognize these things in oneself, which is why it is so important to report unusual behavioral changes in family members and friends.

How Schizoaffective Disorder is Diagnosed

Even for an experienced mental health professional, this is a tricky diagnosis because there can be a range of symptoms that vary by patient and because the symptoms are the same as or similar to schizophrenia, major depression, and bipolar disorder. Any healthcare provider may perform a mental health assessment to evaluate a patient’s symptoms, but any diagnosis of schizoaffective disorder should be confirmed by a psychiatrist.

To be diagnosed with schizoaffective disorder a person must meet several criteria:

Medications are important as a component of treatment for schizoaffective disorder, which is one reason why a psychiatrist should be involved in diagnosis. A psychiatrist can make the most informed diagnosis and prescribe the medications that will help the patient get relief from symptoms. Antipsychotic medications are used to treat the psychotic symptoms of schizophrenia. Just one medication, paliperidone, is specifically approved for treating schizoaffective disorder, but doctors may prescribe any antipsychotic to control hallucinations, delusions, and other psychotic symptoms.

For the symptoms of mania and depression, mood-stabilizing medications can help. These help to reduce the severity of mood swings from mania to depression and make overall mood more stable. For those patients experiencing depression, antidepressant medications can relieve the overwhelming sad and hopeless feelings and other symptoms characteristic of the disorder.

Looking for the Best Schizoaffective Treatment?

Learn More About Treatment at BrightQuest

Medical treatment is typical for schizoaffective disorder, but it can be supplemented with various types of therapy. Psychotherapy in a one-on-one setting can help patients learn to control their thoughts and behaviors, manage symptoms, work through problems, maintain relationships, and create goals with plans for achieving them. A patient may also benefit from therapy with family or in a group setting with other people going through a similar experience.

Patients may also be encouraged in therapy to engage in self-management and can be taught strategies for managing the condition when not in therapy. Self-management involves learning more about the condition, being aware of signs of episodes, knowing their triggers and learning to avoid or cope with them, taking their medications as prescribed, and joining support groups in person or online. Patients may also seek support through social services that help them maintain an independent lifestyle, such as job training or affordable housing programs.

There are several related symptoms, conditions, and issues that may occur with schizoaffective disorder. Some of these may be part of the cause of the disorder, may be caused by the disorder, or may simply occur along with it. The relationship between the condition and these complications may be complicated, and it is not always possible to determine cause and effect:

The outlook for schizoaffective disorder is largely positive. With the right diagnosis and a treatment plan that works for the individual patient, this condition can be managed well. In fact, when compared to other psychiatric disorders, patients with schizoaffective disorder are more likely to be able to maintain a normal, independent lifestyle and to return to a similar level of functioning as they experienced before the onset of the condition.

Experts are beginning to understand schizoaffective disorder much better than in the past, and patients can benefit from this. Although it is a psychiatric condition that can have serious consequences, treatments are available and are effective for most people. It is essential to seek help, to get a diagnosis, and to participate in a comprehensive treatment plan.

We understand that one of the toughest decisions you can face is choosing the right inpatient schizoaffective disorder treatment for the one you love. We’ve taken this journey countless times with other families who’ve come through our doors with the same questions. There are several components that make the unique BrightQuest model so successful.